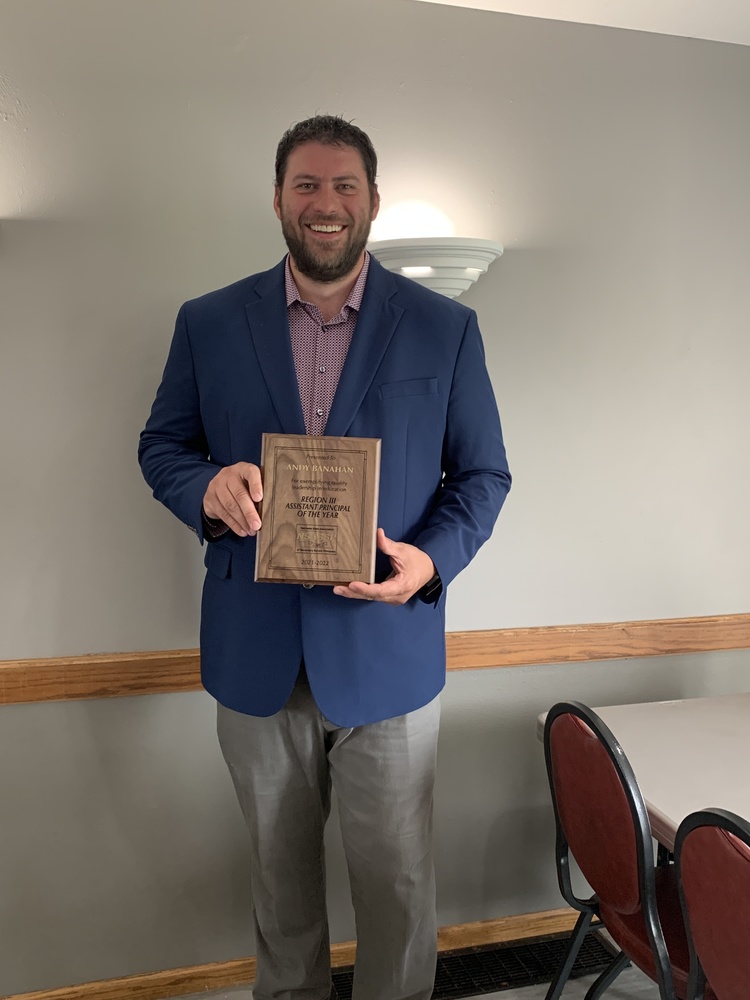 On Monday, May 23, 2022, Andy Banahan, assistant principal at Schuyler Public Schools in
Schuyler, Nebraska was presented with the Assistant Principal of the Year award for Region 3
of the Nebraska State Association of Secondary School Principals (NSASSP).
NSASSP Region 3 principals selected Mr. Banahan for this award. There are 50 school districts
represented in Region 3. There are five regions in the state of Nebraska. As the Region 3 award
winner for Assistant Principal of the Year, Banahan will be eligible to earn the state award that
will be announced later this year in December. He will be chosen by a committee selecting
between the five Nebraska region winners of this award.
Dr. Dan Hoesing, superintendent of Schuyler Public Schools, had the following to say, “Mr.
Andy Banahan is an extremely organized, professional administrator. He leads by example and
sets high expectations of himself and his teachers. Mr. Banahan has excellent management
skills and uses those skills to build a professional rapport with students, faculty, and parents. His
ability to communicate with and relate to a variety of student and adult interests is a real asset to
our district. Mr. Banahan puts in the time both inside and outside of regular school hours to do a
thorough job. He is extremely conscientious and consistent in all aspects of the job. His
dedication and empathy for people is a quality you cannot measure but is reflected by the
people he has served. Mr. Banahan is a committed, honest, genuine professional in every
sense of the word and an excellent choice for the Outstanding Assistant Principal Award.”
Andy Banahan just finished his second year as Assistant Principal and Activities Director
at Schuyler Middle School, in Schuyler Nebraska. His main responsibilities include
working with the middle school ELA, Social Studies, and Physical Education teachers
while also organizing and planning sporting events and activities for the middle school
band and choirs. Mr. Banahan likes to lead by example and is often helping out wherever
possible. He can be seen sweeping gym floors at halftime, driving buses for activities and
college visits, and helping clean up the gym after the games. During his second year in
Schuyler, he took part in the NSIAAA’s first-ever state-level cohort with other activities
directors from across the state which provided him with some great leadership
opportunities to implement at Schuyler Community Schools.
Growing up and being involved in sports at both the high school and collegiate levels
drive his passion for sports and activities. He enjoys working with his coaches and
athletes to push the most out of them so that our students have success. Mr. Banahan
values hard work, a trait he learned early on in life while growing up on his family's farm.
He also values relationships with students and teachers, which was instilled in him early
on in his career working at Walnut Middle School in Grand Island, and while at Boys Town
Day School in Duncan where he started his teaching career in 2011. He believes that
building great relationships with students and staff is the foundation to building a better
education because they know you are in it for them as an individual and not about a test

score. As educators, we get an opportunity to help parents mold their children into good,
responsible, and respectful human beings. This isn’t a job we should take lightly and by
getting to know our student's stories we can do a better job of helping them succeed!
When not at work, Mr. Banahan likes to spend time with his four children, and his wife
Jenna. They can be found supporting their children in their various activities or supporting
the Schuyler Warriors. Mr. Banahan also enjoys watching sports, reading, and traveling
with his family.
Congratulations to Mr. Andy Banahan on this accomplishment. Thank you for your commitment
to education and for serving students, parents, teachers, staff, and your community.